A ‘top of the log’ performance: starring three little bears

The naked, fallen tree trunk protruding from a thick blanket of vegetation was a beacon of hope for my sullen spirits. I had been sitting on the opposite side of the road in my car for about two hours observing a black bear sow with her three young cubs.

I was not exactly feeling as ‘Zen’ as one should when in the presence of a beautiful bear family.

It was mid-June 2020 and I was on my first post-Covid road trip. Things were just strange in our world – they still are.

I had just started a four-week break from work and was counting on the road trip to re-ignite my passion, motivation or at least some sort of drive to ‘do more’ in life.

The day before, I dropped my ‘good’ zoom lens, which I have done many times before, but this time, it broke.

Most distressing in that moment, however, was the fact that I was on a very busy highway. The bears were foraging in an area on the opposite side of a pull-out – I felt safely out of the way in my vehicle – but my view of the bears was constantly disrupted by colossal, rumbling blurs of semis and large trucks.

Despite all of this, however, I managed to capture a few decent-ish images of the cubs peering out from the vegetation. Here is one of my favourites: 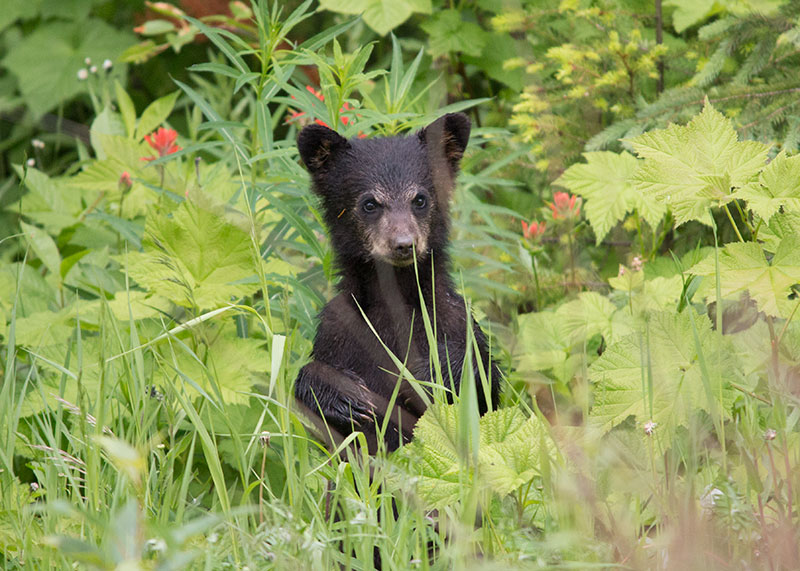 Satisfied with my handful of images, I was preparing to move on when the protruding tree trunk/log grabbed my attention. It sat about 5 meters from where the cubs were foraging.

I immediately knew they would end up on the top of that log, offering me an unobstructed view that even my ‘crappy’ back-up lens could likely lock on to.

Some time later, the lead actor of the three cubs appeared on the log. He confidently walked to the end of the platform, surveyed his surroundings, then retreated back into the vegetation. 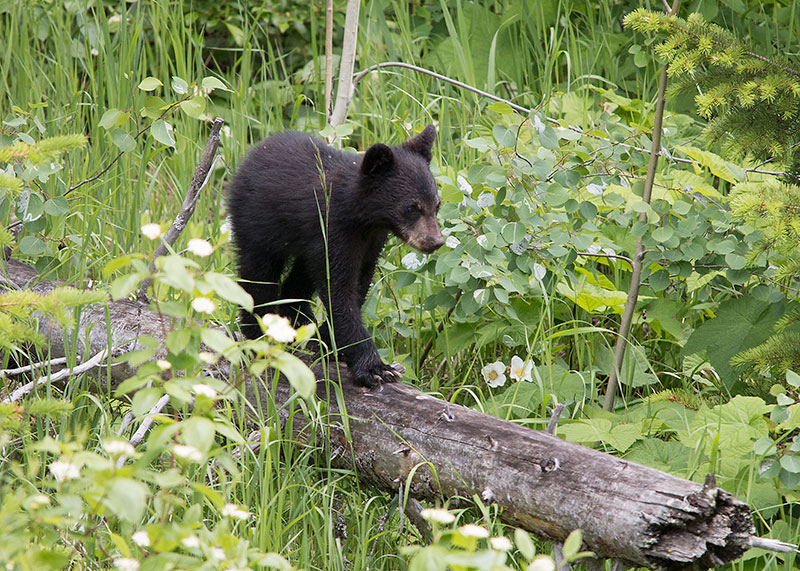 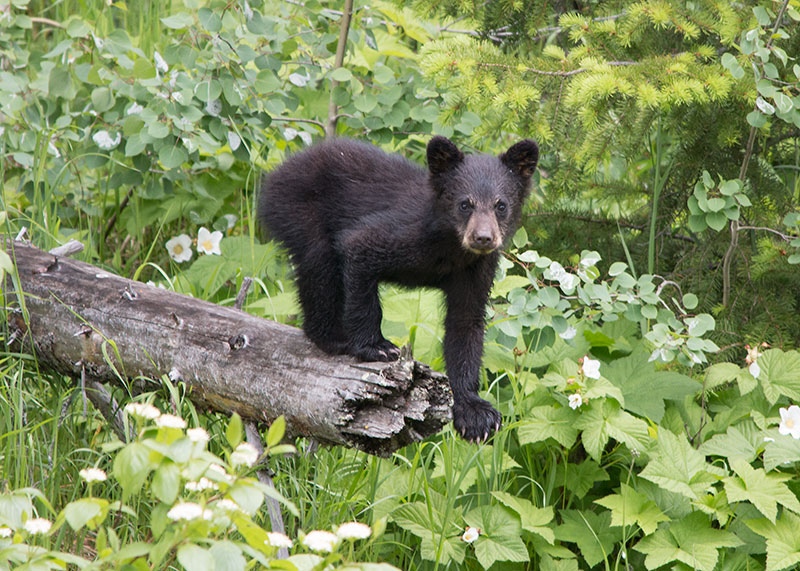 How ridiculously adorable is this!? I was ecstatic, but knew the show was not over – the two siblings entered from stage left.

A bit of a kerfuffle ensued, pushing one of the cubs close to the end of the log. 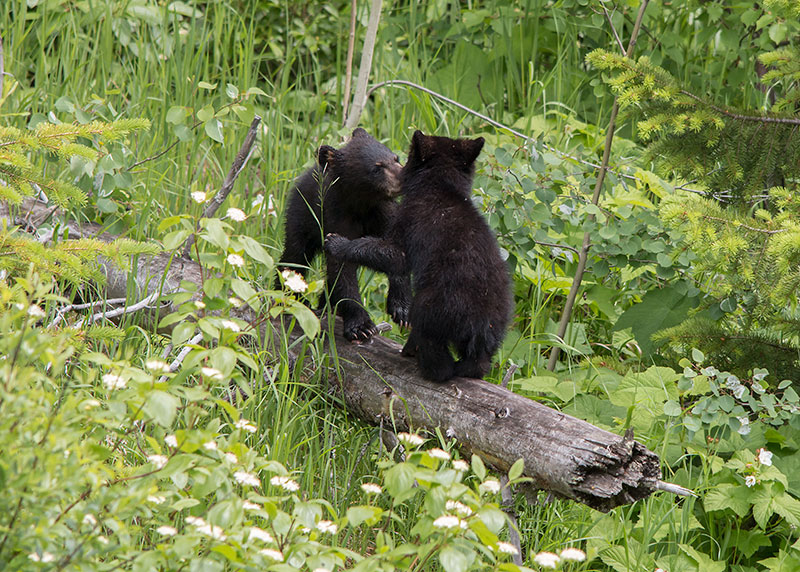 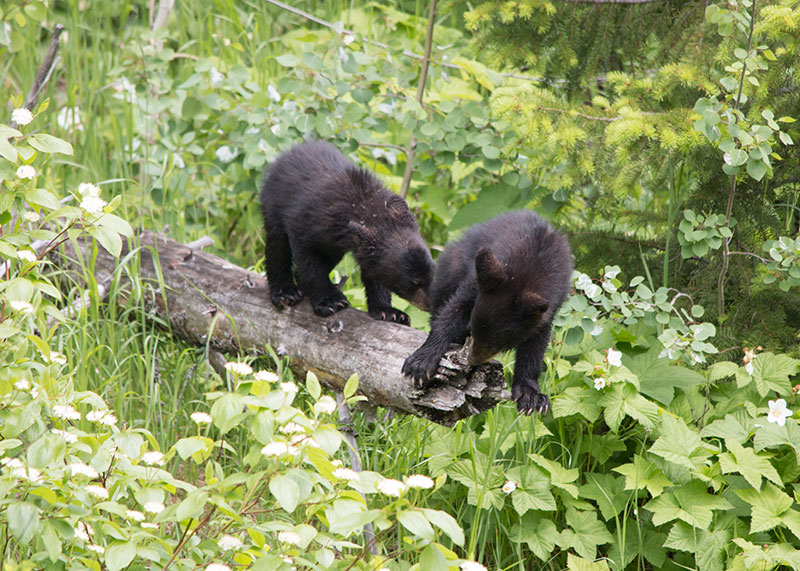 The cub lost his balance, toppled sideways and managed to grab the edge of the log. Awkwardly dangling, feet flaying, claws desperately clinging, his tiny black body elongated and swayed back and forth. 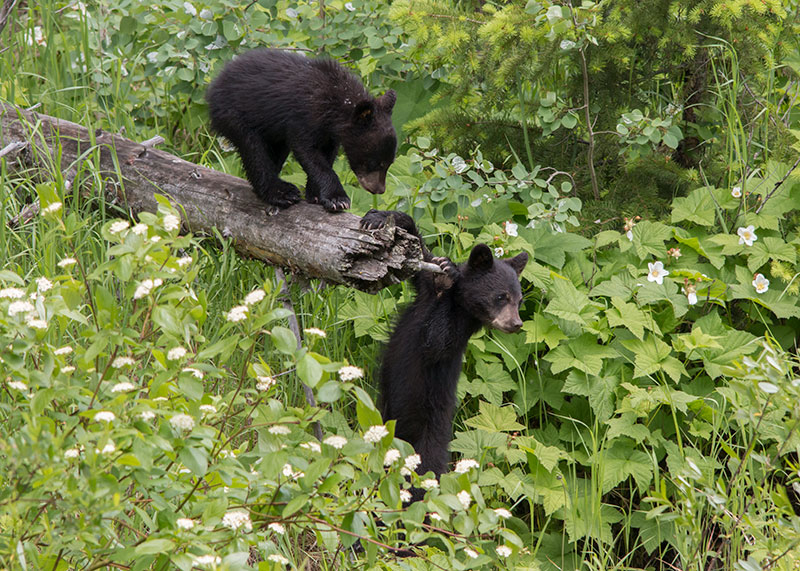 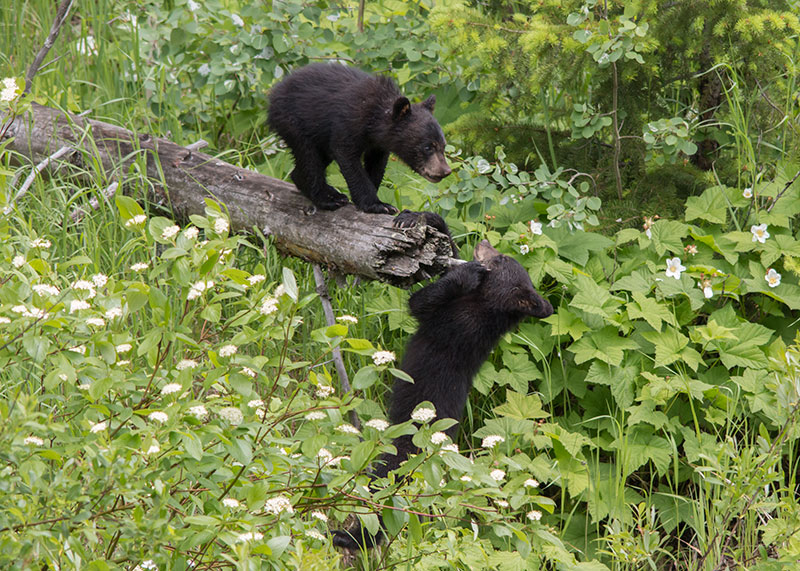 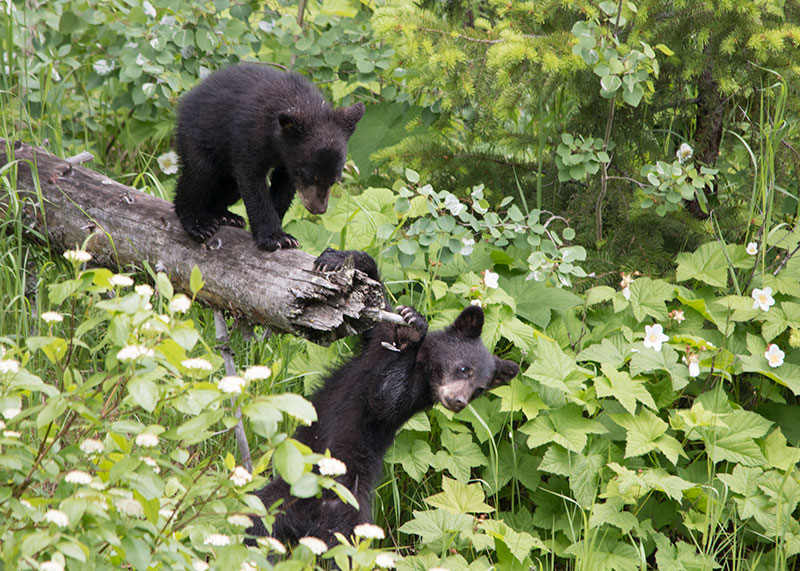 His sibling watched helplessly from above, until the fallen cub dropped gently to the ground and scrambled into the bushes. The sibling chose the safer route of back-tracking along the log.

Their black figures dissipated into the surrounding greenery – the rustling of leaves caused by their movement below was the only indication of their presence.

It was a performance worthy of a standing ovation. I was vibrating with joy for hours after, free of all my work/pandemic/lens/human-destruction worries.

I came down from my bear-viewing high, and of course, things went back to ‘normal.’

Now, three months later, the world is still in the grips of a global pandemic; my break from work turned into the permanent abolishment of my job; my ‘good’ lens is still broken.

Nothing has changed, it seems, so, what’s the point?

In revisiting my experience with this beautiful bear family, I wonder, what they think ‘the point’ is, and am stuck once again by the grace of animals.

This bear family was literally meters away from the highway. They could have been wiped out at any time, just as millions, billions, trillions of animals have been slaughtered on the roadways before.

And what do they do about it? Continue being bears – eating, thriving and surviving as best as they can. For bears, the highway is simply part of the environment – no more, no less. I am the one who sees it as a destructive force.

During the show, the highway became just a road for me too. The log transformed into an elevated stage, allowing me a brief glimpse into the lives of these magical beings.

When I think back, I wonder – how could I have known with such certainty that the bear cubs would perform on that fallen log? Some intellectual knowledge of bears and bear cub behaviour was undoubtedly part of my knowing.

Perhaps I was also tapped into the connective force of nature, a power that I believe allows for deeply meaningful, multi-dimensional levels of experience. I am so grateful for our wild world.

Until next time, continue loving life and everything wild.