“Yep, that bear is definitely dead,” my friend confirmed what I already knew when I showed him the photo on the back of my camera, taken earlier that morning in mid-June, 2020.

I had watched the scene unfold while on a photo excursion in the rockies. A black bear, who I have decided to call Cinnamon, wandered on to the road and jumped up to the driver side window of a vehicle. I managed to capture a series of photos: 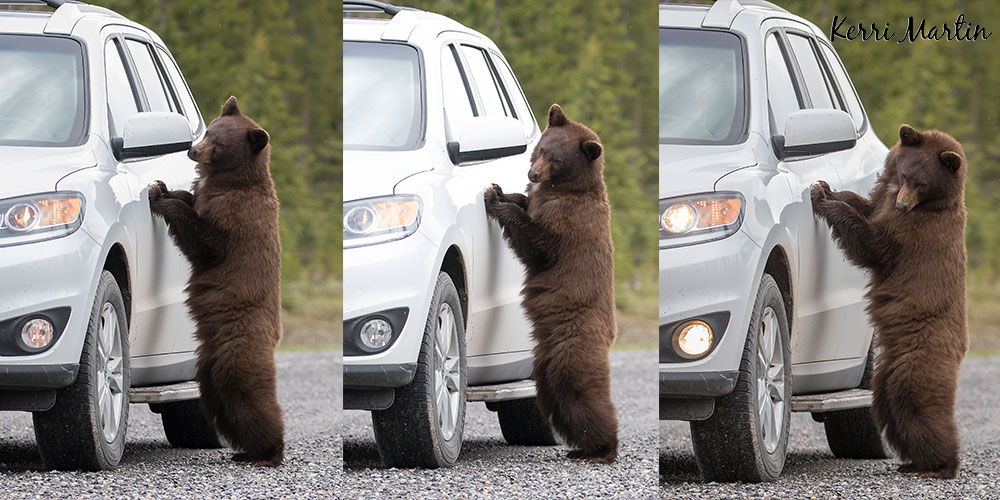 When the bear wandered off, I shared my contact information with the people in the car, who I now know to be Art and Dianne Wushke. Dianne sent me the photograph she got from inside the vehicle. 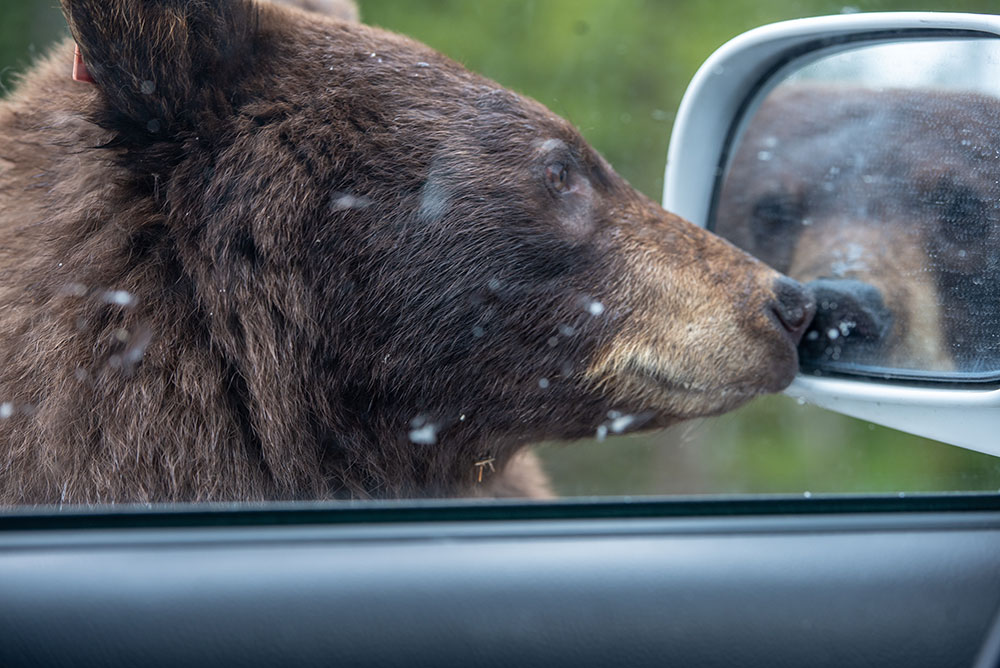 Cinnamon, admiring herself in the side mirror. Photo by: Dianne Wushke

Dianne and Art had the same worry as myself and my friend – this is a bear who is used to being fed from vehicles, and jumped up to look for a hand out.

As with many wildlife encounters, a lot of the magic of the experience is diluted by an awareness of the greater implications of the scenario. And by greater implications, I mean the endless examples of suffering due to the interference and destructiveness of humans.

The sad reality that Cinnamon was food-conditioned and would likely die haunted me while driving home that day. I was overcome with sadness.

But then, I started thinking more deeply about the experience, the nuances of Cinnamon’s behaviour – her movements, body positions, direction of gaze.

Cinnamon was grazing on the side of the road when I came across her that morning.  Dianne was photographing her from her vehicle with Art in the driver seat. They maintained a respectful distance and were being quiet and unobtrusive. I pulled over on the opposite side of the road to photograph and observe.

She seemed fairly calm and focused on the vegetation. Then, something in the air drew her attention.  She turned her nose upwards, seemingly sensing the presence of something interesting, but unknown. She circled around, appearing to be a bit discombobulated for a few moments, before she confidently locked on to the scent and moved towards the vehicle.

Something in or around the front wheel summoned her sensitive nose. She sniffed around in a semi-circle to the top part of the rim – the intenseness of her curiosity seemed to increase. Her nose moved upward until she rose to her hind legs, placed her front paws on the door and looked in the window, astonishing the human occupants. She looked in the window for a moment or two before looking in the side mirror.

Then, she sort-of startled and hopped back from the vehicle, returned front paws to ground and moved back to the vegetation on the side of the road. 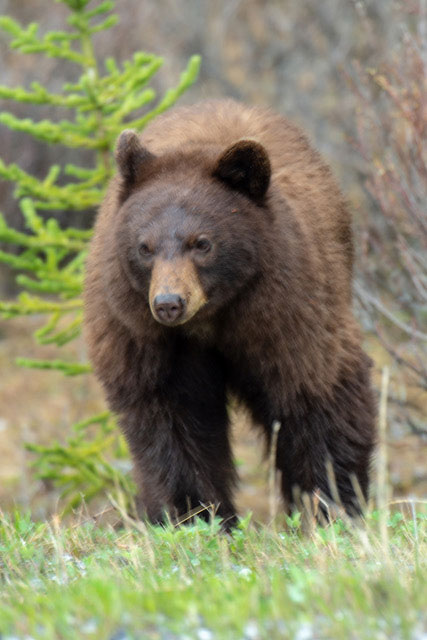 Cinnamon, grazing on the side of the road. Photo by: Dianne Wushke

The nuances of her behaviour shifted the narrative in my mind. She seemed to be drawn to the vehicle because she caught a scent of something. Perhaps she had approached the vehicle out of innocent curiosity versus an uncontrollable need for human food?

Bears are naturally curious and use their refined sense of smell to evaluate their environment. Awareness of how her actions seemed to emulate curiosity suggested the possibility of a non-lethal outcome for Cinnamon.

For bears and other predators, being food-conditioned, or actively seeking human food, is basically a death sentence. All bear-loving humans know: A fed bear is a dead bear.

A few years ago, the story of a BC grizzly bear photographed looking into a camera made the news and went viral.

While the grizzly bear was most certainly habituated to some degree, he was not believed to be food-conditioned based on his actions. With his subject of interest being a camera, there was no obvious connection to food.

Cinnamon, also undoubtedly habituated, appeared to be begging, making myself, Dianne and Art, and a number of others we shared the experience with believe she had been fed from a car window and was now actively seeking handouts.

Perhaps we were all wrong.

Maybe Cinnamon was just being intensely curious, as bears are known to be. Becoming aware of such a beautiful possibility transformed how I was feeling. I moved from despair to hope.

When I imagine Cinnamon dying, I feel absolutely horrible about the circumstances of our world today. There is so much wrong with us humans, so many ways animals suffer because of our selfish and destructive actions.

When I imagine Cinnamon as a healthy bear thriving in her environment, I feel intense joy and appreciation. Sure, there is a lot of suffering, but the majority of habituated bears living in close quarters with humans have successfully adapted to our presence.

It is difficult to think beyond our default assumptions about the way this world works, especially in the volatile state we are living in today. It is perfectly natural to feel anxious and sad.

If is also perfectly natural to believe in the possibilities which lay beyond our default beliefs, in large part shaped by history, society and culture. For now, I choose to view Cinnamon’s behaviour as a beautiful expression of the grace of animals.

There is so much magic in this seemingly subtle shift.

For some, it may seem simple-minded and foolish to think Cinnamon approached a vehicle for any reason other than being conditioned to human food. I understand – it can be very uncomfortable, and perhaps even feel counter-productive, to allow ourselves to align with the ‘rightness’ or ‘goodness’ of our world. Society tells us we should always be focused on fighting against what is wrong.

For me, awareness of the broader potential gives me the option of making a conscious choice about where to place my focus. I feel better, more connected and at peace, when I allow myself to imagine a naturally curious bear instead of a fed bear/dead bear. I feel more able to experience and share the beauty of our natural world.

This realization, of course, does not mean I am free of worrying about all of the bad stuff. There is a lot of bad stuff, and I can’t NOT go there. However, when I am able to shift to a place of hope, I am darn sure going to allow myself to go there as often as I can. Hope is powerful.

Until next time, continue loving life and everything wild!