The creature stood firm, every fibre of his being enraged, emanating an intense resolve on par with Gandalf’s infamous ‘YOU SHALL NOT PASS’ pronouncement in The Lord of the Rings: Fellowship of the Ring.

The Spruce Grouse stood on the edge of a snowy pathway, staring into my soul, his fiery red eyebrows vibrating with aggression.

It was January 2020 and the snow was deep in the Canadian Rockies. I was on a quest to find a Pine Marten, and had propelled myself up a mildly intense incline in search of tracks. 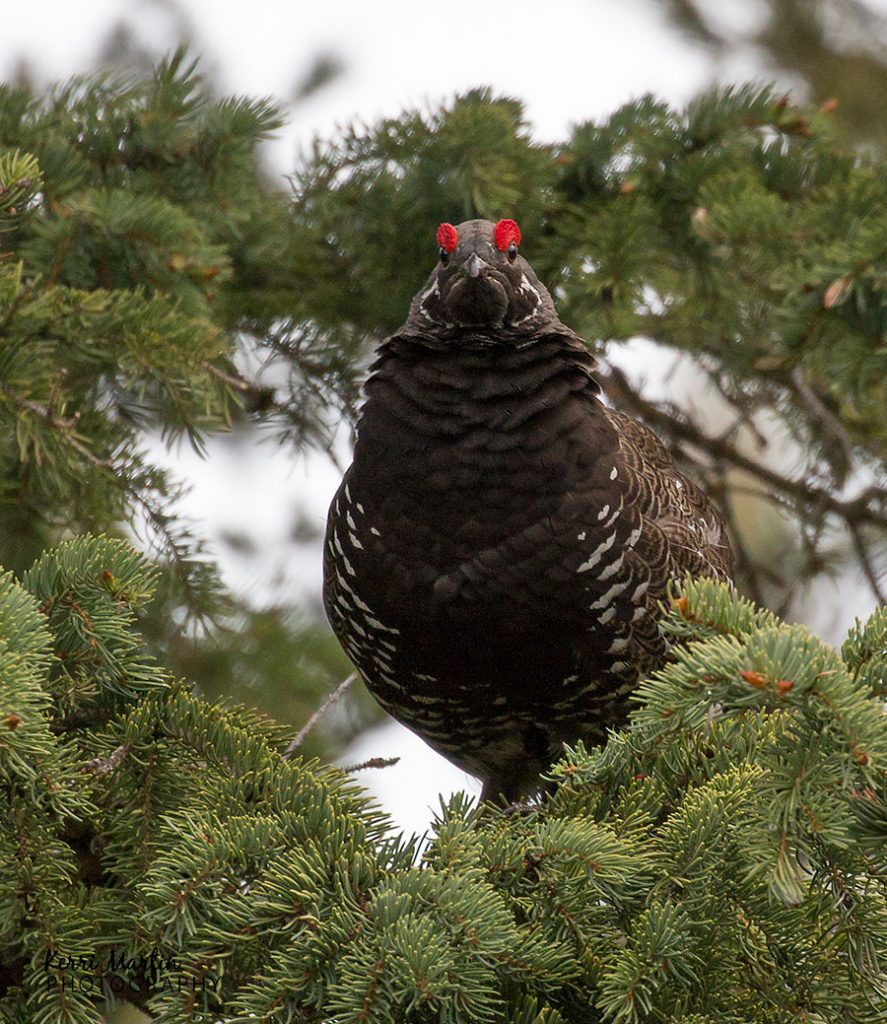 Spruce Grouse stare from a tree, photographed in Kananaskis in June 2018

Having found many tracks (but no Marten, of course), I was grateful to be headed back down. It was a short hike, less than a kilometre, but the uneven-ness of the snow and elevation took its toll on my less-than-conditioned-body.

The downward trajectory eased the strain on my muscles, but did nothing to alleviate the awkwardness of passing another hiker headed in the opposite direction.

With the path just wide enough for one person, both parties are forced into an awkward ‘step-around motion’ in order to avoid veering too far off the path and sinking into waist-high snow.

With the forced closeness, I could not help but recognize the woman approaching me on the path – I had passed her before, when I was heading up and she was heading down.

She offered no explanation as to why she had turned around, and I did not ask, but I thought it was strange.

Minutes later, the same thing happened – three hikers who I had previously passed were working their way back up the mountain.

“There’s a bird on the trail and he won’t let us pass,’ one of them stated. Having seen grouse tracks and wing imprints on my way up, I immediately knew they were referring to a male Spruce Grouse.

‘Yep,’ one of them confirmed, and suddenly I became uncharacteristically confident, perhaps even downright cocky.

‘It’s a male Spruce grouse – they can be a bit aggressive and territorial. I have run into them on trails before. I’m not worried,’ I proclaimed.

‘Good luck,’ one of them said, ‘we’re heading back up to take the other way down.’

Luckily for them, and the other woman who had turned back, there was another path leading down from the summit.

The grouse, who I have named Gandalf, stood about five meters ahead of me on the left side of the path.

On my right, a new snow path was being carved by four, young hikers. Apparently, rather than a hike back up the mountain, they chose the route of semi-circling around the grouse in waist-high snow.

And they were taking a massively wide berth. The imprints in the snow surrounding Gandalf spoke to an attempt to pass the bird with a mere side-step around.

Obviously, this tactic did not work. 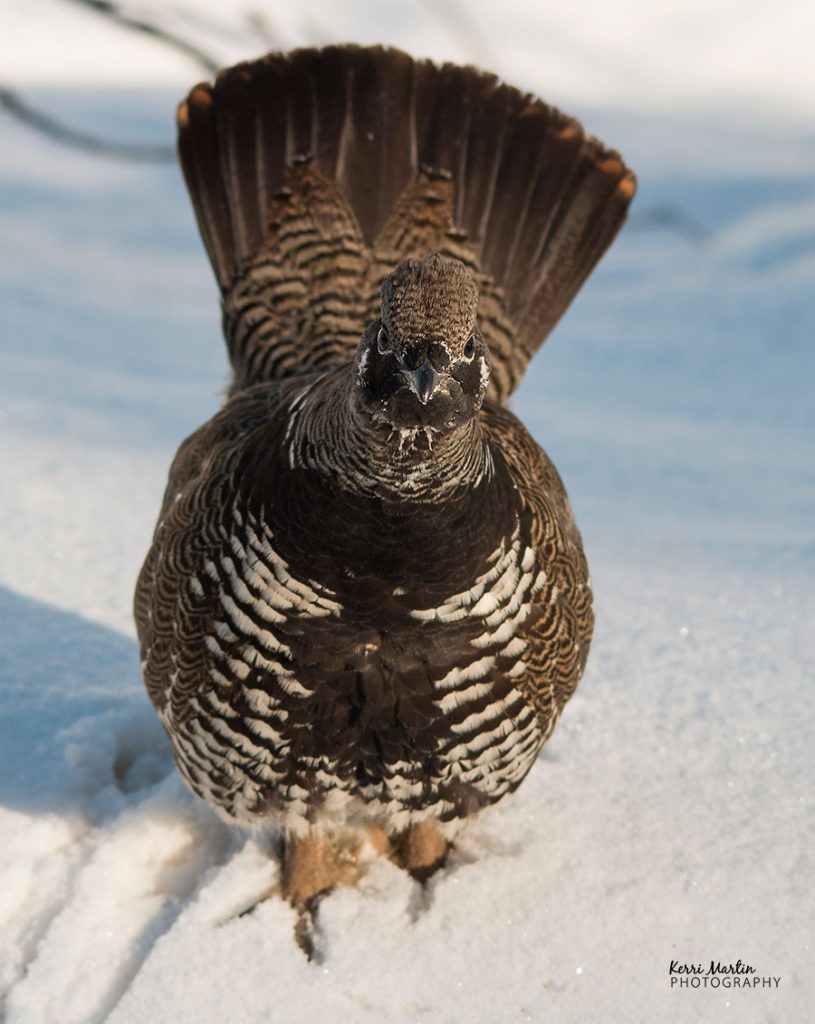 I guess they thought a short plunge through deep snow was easier than a short hike back up. In observing their strained movements and painfully slow progress, I was not so sure.

For a millisecond, when I stood adjacent to him, I indulged the arrogant thought that my soothing energy had subdued his temper.

I was wrong.  When I looked down, we made eye contact and I immediately knew I would not be spared.

When his claws penetrated the nylon fabric of my pants, I felt the intensity of his grip. Gandalf was firmly attached to my leg pant, pecking at my shin.

His body swished forward in unison with my stride for a couple of terrifying steps, then he suddenly released.

But he had not given up – he stood directly in front of me within the grove of the foot path.

My resolve weakened. I looked back and considered my options: a kilometre-long hike back up or a power plunge through the surrounding snow.

I was tired – both options sucked. My resolve strengthened.

I stepped forward, but his time I was prepared for his grasp on my pant leg. Instead of walking directly forward, I shuffled sideways a bit, then backwards and managed to sort of shake him off my leg.

I was afraid he would continue his pursuit, that I would be walking half a kilometre back to my car with a grouse attached to my leg.

To my relief, Gandalf jumped back up to his path-side perch and resumed his guard, as if he hadn’t just fought an opponent 20 times his size.

Initially, I was worried by the grouse’s erratic behaviour. I had encountered agitated male spruce grouse before, but had never been attacked.

I had no idea why he was guarding his territory so ferociously. It was January, not grouse mating time, so raging hormones would not have been the cause.

Yet, he was protecting his domain with as much ferocity as a grizzly bear sow protecting her cubs.

I have never known any one who has been attacked by a grizzly bear (or black bear) – it is remarkably rare, despite what our culture tells us about these ‘vicious’ predators.

However, when I posted this story on Facebook last year, a few of my photographer/outdoor friends had their own stories about being confronted by aggressive male Spruce Grouse. 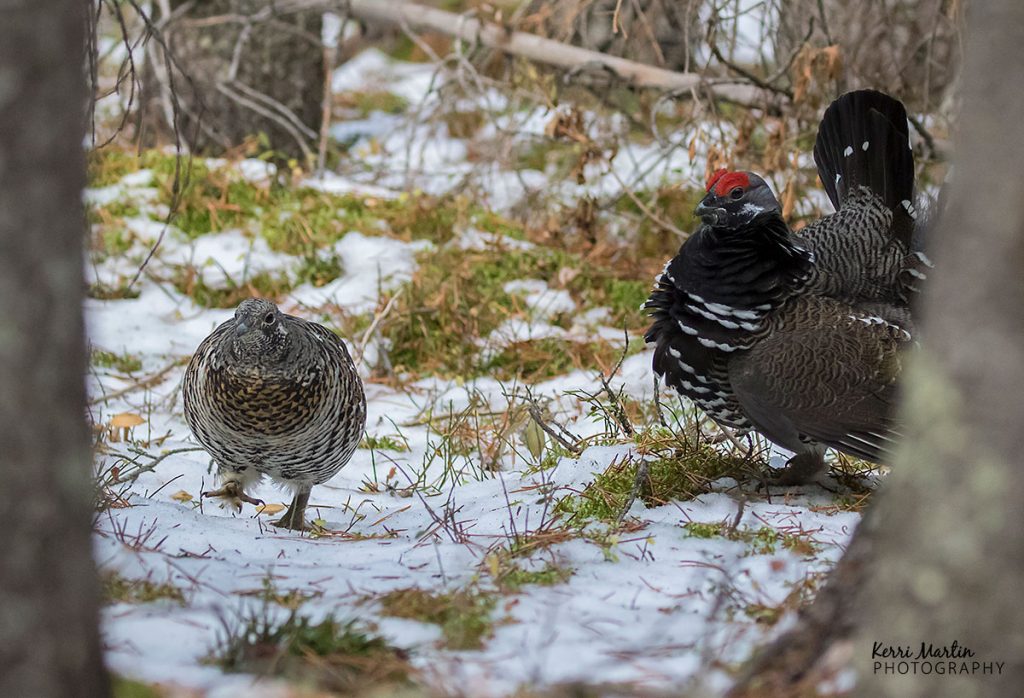 In October, 2019, this male Spruce Grouse was confused into thinking it was mating season, with the level of light matching spring. His bold pursuit of a female grouse was meet with complete indifference, yet he still pursued.

I love the beautiful paradox in this, how nature so seamlessly shatters our preconceived notions about the animal world.

I have so much love, respect and admiration for Gandalf the grouse. Seriously, talk about standing your ground!

I can honestly say, I have never stood up to anyone with even a fraction of the resolve he demonstrated that day.

I did not attempt to photograph Gandalf, of course. The photos in this post are from a few other encounters I have had with male Spruce Grouse, each showing some degree of the magical boldness and Gandalf-like resolve inherent to these magnificent creatures.