Note: This blog was originally posted on my old ‘Frog Blog: For the love of Frogs’ in August 2012.

Me and my bucket

I watch four tiny toadlets try to scramble up the unrelentingly smooth side of the small black bucket I was holding. Standing on the side of the highway in the blazing sun, I feel bad for what must be a horrifying experience for these guys, but at peace in knowing I was there to help. The bucket they were so desperately trying to escape was a vessel that would ensure their safe crossing of the highway.

These four toadlets were among the thousands that would be escorted in small buckets across the highway in late August, 2012 at Summit Lake, BC. Toadfest is a conservation initiative coordinated by Fish and Wildlife Compensation Program in BC, to help Western Canadian toadlets cross the highway to the upland forest where they hibernate during the winter.

Despite the help, only one per cent of the toadlets will make it to adulthood. This low survival rate is natural for the Western Canadian toad.  The highway between their birthplace and the area where they mature, however, is not. Toadfest volunteers help ensure that they survive at least the first leg of their long journey.

How did I end up at Summit lake, a seven hour drive away from Calgary, at the end of August?  In preparation for an earlier trip to the Kootneys at the end of July, I googled ‘frog migration in BC.’  I was hoping to find some documentation of something I had seen in this area on a 2006 trip.  I stopped at a lake and found thousands of what I thought were baby frogs (but were probably toads) hopping around the shore. It was fascinating, as you can imagine, for a frog lover like me. 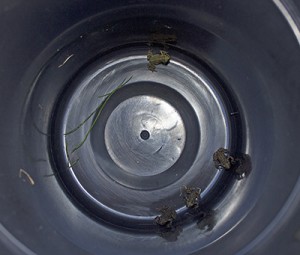 I knew we would be driving by this lake, which I discovered is Fish Lake, on my July trip, so I wanted to find more information on a massive frog/toad migration. I did not find anything about Fish Lake, but did discover the Summit Lake Toadfest. A stop at both Summit Lake and Fish Lake on the July trip only yielded a few adult Columbian Spotted frogs. Based on my research, I knew July was likely too early to see the masses, but was hoping to get lucky. No problem though – I could always come back in August!

So after driving 500km, I have to admit, I was a little disappointed to be standing on the side of the highway waiting to escort a measly four toadlets to safety. I had envisioned carrying bucket after bucket of overflowing toadlets across the highway. But, there were at least a hundred (if not more!) volunteers doing the exact same thing. And frankly, only so many toadlets trying to cross the road at that particular time.

However, I had arrived at Summit Lake an hour early, giving me a chance to wander around and take lots of pictures the little guys before they were ‘bucketed’ away.  I didn’t see the masses I had expected, but there were several at various spots making their way towards to highway.

So after bidding farewell to my four toadlets, I decided to leave the rest to the capable hands of the other hundred or so volunteers. Plus, I was anxious to get to Fish Lake while I still had daylight. 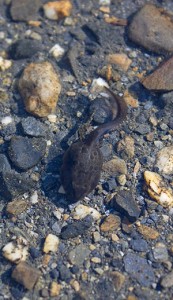 I arrived at Fish Lake, a rest stop on highway 31 between New Denver and Kaslo, BC, around 6pm, with plenty of daylight left. And it was beautiful! As soon as I saw the peaceful, clear water, my expectations of what I might find disappeared, and I found myself in the moment, being drawn towards the shore.

Something happens ‘in the moment’ when I am looking for things in nature – birds, frogs, animals, etc.  I become acutely aware of my surroundings, and time seems to stop. Although I had been anxiously anticipating what I would see at Fish Lake, in the moment, it no longer mattered if I saw anything at all. Just the fact that the possibility exists was enough to allow myself to truly be there.

So in this state of blissful connection, I slowly walked up to the edge of the lake. No life to be seen at my starting point, so I made my way along the edge. Ah ha! Tadpole sighting! There were hundreds (maybe thousands) of tadpoles. Upon closer inspection, I noticed some of the tadpoles were full-fledged tiny toads, with legs and a tail. How cool! And others were tadpole shaped, but I could see the forming toad through the viscous, gelatinous layer. Wow. 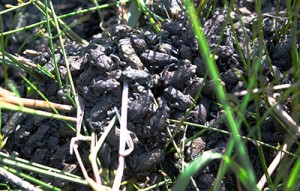 I continued to edge slowly along the shore, seeing more and more of the toad-tadpoles, and then the ground started moving. Toadlets hopped away in all directions! Slowly and more carefully, I edged along to an increasing amount of frenzied hopping to find the toadlet mountain range – literally mounds of toadlets, piled on top of eachother, scrambling to get to the top.

My photos do not do justice to the sheer volume of toadlets. It was absolutely fascinating. I stood mesmerized for what seemed like hours (but was likely only minutes). All of a sudden, a large Columbian Spotted frog popped out surprisingly close to me, right in front of the toadlet mountain range.  I thought for a second, ‘hmmmm, maybe these are baby spotted frogs, not toads, and this is mom coming to protect her hoards.’ 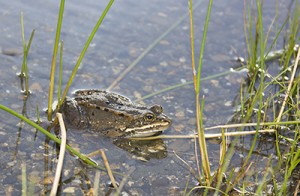 But no, it was the exact opposite. The Columbian Spotted frog was there for a feast! It would sit perfectly still, and when a little toadlet got close, it became supper for the massive frog. I normally don’t like watching creatures getting eaten, but I could not help but smile at the both the cleverness of the frog, and the absurdity of the fact that it was basically engaging in cannibalism. Sure, it was frog vs. toad, but they are both very similar amphibians.  However, this behavior is normal in nature, and I’ve read frogs tend to eat anything they can get their tongues on.

Daylight disappeared and I left the spotted frog to its supper.  The next morning, I stopped at Fish Lake on my way back to Calgary.  It was still dawn and the light was ‘not great’ for pictures, but I was anxious to see the toadlet mountians again. I crept carefully towards the shore and, hmmm – no tadpoles/toadlet mountains to be seen. There were a few tiny toads hopping around the shore, but no where near the volume I had seen the previous evening. Surely the frog couldn’t have eaten them all!? 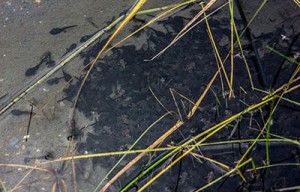 Then I noticed a browny/blacky circular dis-colorization in the water among the reeds. I realized this was the mass, but they were all huddled together, creating a pancake of tadpoles/toadlets. Once again, I was in awe – cursing the fact that I don’t have a water-proof camera.

I feel blessed to have gotten the opportunity to witness nature in action in so many ways. The tiny toadlets at Summit lake, drawn by instinct to the treacherous journey to the upland forest; the Columbian Spotted frog’s instinct to survive by feasting on its own kind; the pancake of toadlets/tapoles huddling together for safety; a hundred volunteers dedicating their time to escort toadlets across the hightway. Mother nature lays her blanket of protection and survival over all her creatures in ways we could not possibly understand. 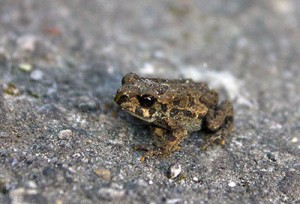 For me, it is humbling to think about the processes of nature, how instincts in animals prevail over logic and reason. Humans might think: How could that frog eat its own kind? Why don’t the toads bred somewhere else? Well frankly, it’s because I don’t believe nature’s creatures ‘think’, at least not in the way us humans do. They are tapped in to an instinctual force that, in my opinion, is far more powerful than thought alone.

Thank you to the organizers of Toadfest for allowing me to be part of this amazing project!