Amphibians are an indication of our dying planet. So many species have disappeared, and we humans, of course, are largely to blame.

Yes, certain types of fungus and bacteria are responsible for wiping out entire species, but the primary reason for the decline in amphibian populations is habitat loss.

This profoundly sad reality struck me as I stood on the shore of Fish Lake, BC in early October.

I was initially delighted to see several tiny toadlets hop away as I shuffled along the water’s edge. In planning my most recent trip to BC, I knew I would visit Fish Lake, but I was not expecting to see toads this late in the season. 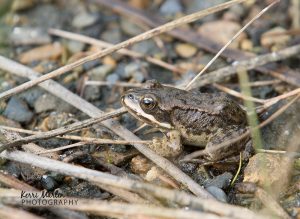 Bady Columbian Spotted frog. As mentioned in part two, Fish Lake is also home to a number of CSFs, a number of whom were out among the toads in early October.

It turns out, toad migration extends into October in this region.

But as I walked among the tiny toads, I realized my steps were disturbing them, causing some of the toads to jump in the wrong direction, back towards the lake.

The toads were embarking on the first leg of a treacherous journey, working their way to the upland forest where they would burrow underground and mature for 4 to 6 years.

Only one percent would survive, and there I was, forcing them to go backwards.

I felt horrible. What a remarkably selfish act it was for me to walk among such fragile creatures, simply because I wanted to see them, to photograph them, to be with them.

My actions melded with all the atrocities of humanity. I was ashamed of my species.

I stood paralyzed, not wanting to cause any more harm.

I looked down at my shoes and noticed my feet sinking into the muddy, clay surface. My presence seemed so overwhelmingly heavy.

About the size of a baby fingernail, the baby toads left no indent, their movements barely distinguishing them from the environment.

I stood still and watched. Then, the toads spoke to me and this is what they said:

(Not literally of course 😉 )

I was enamoured by their delicate movements, their tiny back legs thrusting them over an obstacle-course of rocks, dirt and grass. I was inspired to attempt to capture their movements on video. As is evident in the quality of my footage, I am not overly practiced in the art of videography. Still, I wanted to share:

In allowing myself to be there, to connect with the energy of the toads, I experienced a familiar shift. A more expansive state of conscious awareness feels like a good way describe it at the moment. There is a timeless quality, and a lightness which casts away dark emotions.

This nebulous shift, that I often experience in the presence of wild animals, is the topic of many of my blog posts.

Yet also in these toads was something bigger – something connected to my identity.

They are so sensitive, so fragile, so vulnerable to their environment.

Dear toads, I so relate. I am not physically vulnerable – my chances of surviving until tomorrow are far greater than one per cent – but I am extremely sensitive to certain aspects of my environment.

Sensations, energies, emotions – all of that.

The old adage ‘wouldn’t hurt a fly’ describes me perfectly. I would not purposely hurt a fly, or any living being.

The flies who sneak into my condo during the summer are not swatted and killed. The spiders that end up in my bathtub are encased within a glass and a piece of paper and ushered gently outside.

Yet I eat meat and use products made from animals. I try to make conscious choices, but I understand how my thoughtless consumer habits have contributed to unthinkable suffering for so many animals.

I get the hypocrisy, and often feel bad about it – which is another dimension of this whole sensitivity thing.

Up until about a year ago, when I started exploring the notion of being ‘highly sensitive,’ I resented this part of myself. I wished I did not have to feel so much.

But I have been shifting, and toads are an inspiring illustration of the power of sensitivity. 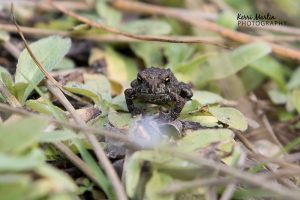 Like fish, amphibians have thin, porous skin, allowing them to absorb oxygen and nutrients from water, but also making them extremely vulnerable.

Their skin is less of a protective shield, as is the case with other animals, and more of a conduit to maintain balance with the environment.

In toxic environments, they get sick and die, hence the reason they are an indication of our dying planet.

In healthy environments, they transform – literally metamorphosis – as a natural part of their life cycle. They grow limbs and lungs and learn to move on the land. How amazing is this!?

Successful metamorphosis requires a continuous flow of oxygen, massive amounts of energy. The absorptive quality of their skin is essential for their transformation.

Even more remarkable about Western toads is the massive migration they embark on mere weeks after they are born.

This past October, on the shores of Fish Lake, I tapped in to the absorptive/transformative power of toad energy.

I understood how my sensitivity informs who I am, how I move through this world and how I interact with my fellow humans. For a few precious moments on the shores of Fish Lake, I was home.

The pain I was feeling around failed relationships, job abolishment and the global pandemics did not disappear, but loosened its grip on me in the aftermath of my visit with the Fish Lake toadlets.

I feel like we humans, as a species, would benefit from from embracing toad energy more often. I know we are all feeling the pain of the extreme divisiveness in our world, whether we consider ourselves ‘overly sensitive’ or not.

Feeling at home in our own skin is difficult these days.

But, we are connected to the same evolutionary forces of survival which propel baby toads onward, towards transformation. Sensitivity is simply about sensing more, feeling more, allowing our selves to tune in to the balanced rhythm of our natural world.

I am so grateful for my precious toads, and all the miraculous animals who have honoured me with their presence.

I plan to continue my exploration of animal energy in future blog posts. Next up is Black Bear, and after that, Pine Marten.

Stay tuned, and until next time, continue loving life and everything wild 🙂