‘That’s an ffing otter!!!!’ I blurted, spotting a dark, oblong body in the middle of the snow-covered road. Within seconds, the figure slid from our view, disappearing through the trees towards the large lake that lay beyond. 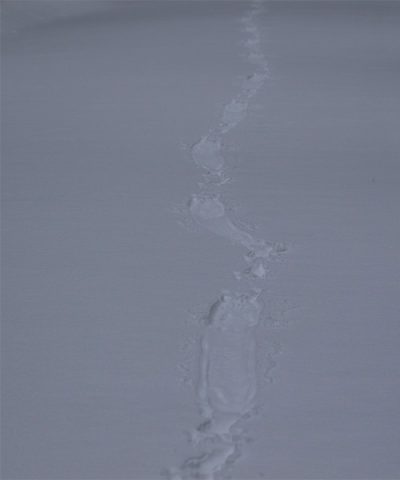 It was late April and Jamie and I had traveled 900 kilometres from Calgary to Prince Albert National Park, Sask, with the goal of finding and photographing Northern River Otters.

We were ecstatic to catch a brief glimpse of the large mustelid (weasel), uniquely adapted to an efficient mode of travel on land. While river otters mainly live in water, they have a mind-boggling ability to belly-slide across the snow.

In the midst of an intense spring snowstorm, we drove towards the spot where the otter disappeared and examined the tracks. They matched several tracks we had already seen dotted along the road.

If it weren’t for the intermittent imprints of four feet, an otter’s tracks could easily be mistaken for a small toboggan being pulled across the snow.

The storm was intensifying, but this brief glimpse was the first time both Jamie and I had ever seen an otter. The resulting excitement reduced our mind-numbing tiredness to an easily ignorable annoyance.

We propelled ourselves onward, much like an otter across the snow, embarking on an intense search for the toboggan-like creature.

Dense vegetation and deep snow made it virtually impossible to follow the tracks through the trees, so we drove back to a clearing with a view of the lake. We found the tracks flanking the shoreline. With the otter’s trajectory in sight, we followed the sliding imprints meandering along the lake. Stretches of trees frequently obstructed our view, forcing us to drive to the next clearing, pick up the tracks and continue on. We repeated this routine several times before the tracks disappeared.

The large lake opened up on one side of the road – a meadow, that I assumed was a  swampy bog in the summer, created a clearing on the other side.  The mouth of a cylindrical culvert carved its way out of the side of the road, feeding into the boggy clearing from the lake.

We went back to the last place we had seen tracks, followed the tree line and managed to pinpoint the exact spot where the tracks disappeared. The otter appeared to have burrowed under the icy surface of the lake at the base of the trees. 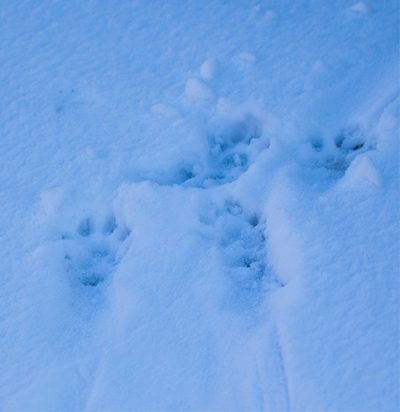 Not seeing any tracks leading away, we assumed she was tucked in just below the surface. We waited at the clearing, hoping the otter would emerge and continue her lake-side journey.

After about an hour, we gave up and started heading towards our motel, thinking a good night’s sleep will refresh us for the next day.

While the intention was to retire for the evening, we found ourselves talking about doing another ‘quick’ pass and were eventually drawn back to the meadow. We just had to check again.

We reached the bog and immediately saw the landscape was now imprinted with several lines of tracks, leading from the culvert, part-way into the clearing, then back again. A pool of fresh urine and feces lay on top of the mouth of the culvert.

‘WTF? This wasn’t here before, was it?’ I asked Jamie. (Note: I swear a lot when looking for animals)

“Definitely not!,’  he replied.

Perplexed, we turned to the other side. The lake-side of the road now revealed an otter-sized hole in the snowy surface – a set of tracks led towards the road in the direction we had just come from.

We looked behind and noticed fresh otter tracks right beside our tire tracks. They seemed obvious now, but we somehow missed them.

The tracks. The scat. The hole. The clues merged to reveal a detailed account of the otter’s movements. She heard the car drive away, worked her way below the surface of the ice and under the road via the culvert, emerged in the bog, marked her territory, slid around in and out of the meadow a few times, went back through the culvert to the lake, popped out of the snow, and proceeded to follow our tracks down the road.

The tables had turned. The trackers had become the tracked. 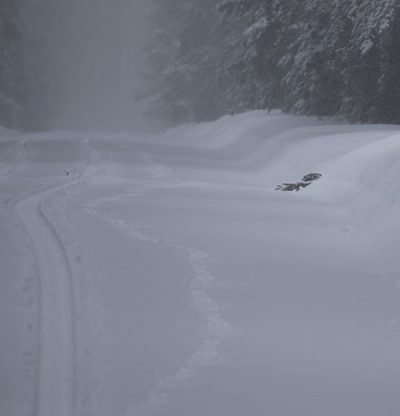 We turned the car around and followed the trail of belly-sliding for about half a kilometre. Once again, the tracks disappeared into the trees, likely at the exact time when the otter heard our approaching car.

We definitely should have given up at that point. But no – we headed back towards the bog hoping the otter would double back and reappear.

Finding nothing, we drove back and forth on the 10 k stretch two more times – the last pass revealed more frustratingly fresh tracks along an area of the road we had just driven mere minutes before. The elusive otter taunted us to the bitter end.

Hunger, despair and darkness finally forced us to throw in the otter-tracking towel.

After a night of restless sleep, punctuated by otter-laced nightmares, we were back on the road at sunrise.

There she was, sitting on the road, right in front of the meadow. We saw her, she saw us, then she quickly disappeared into the culvert. We swore a blue streak and pulled over on the opposite side of the road.

We didn’t know what to do. Should we wait again in the hopes she would reappear? Give up on her and expand our otter search to other areas? Crawl through the culvert from opposite sides and trap her in the middle? (I’m joking of course!)

We sat in the car and watched the meadow side of the road. Thankfully, movement on the opposite side grabbed my attention. I turned just in time to see the otter’s head popping out of the hole she had created close to the shore of the lake the night before.

We made eye contact. I could barely move. ‘She’s right here Jamie,’ I whispered excitedly, scrambling to raise my camera. I was able to snap a few frames before she disappeared below the surface. 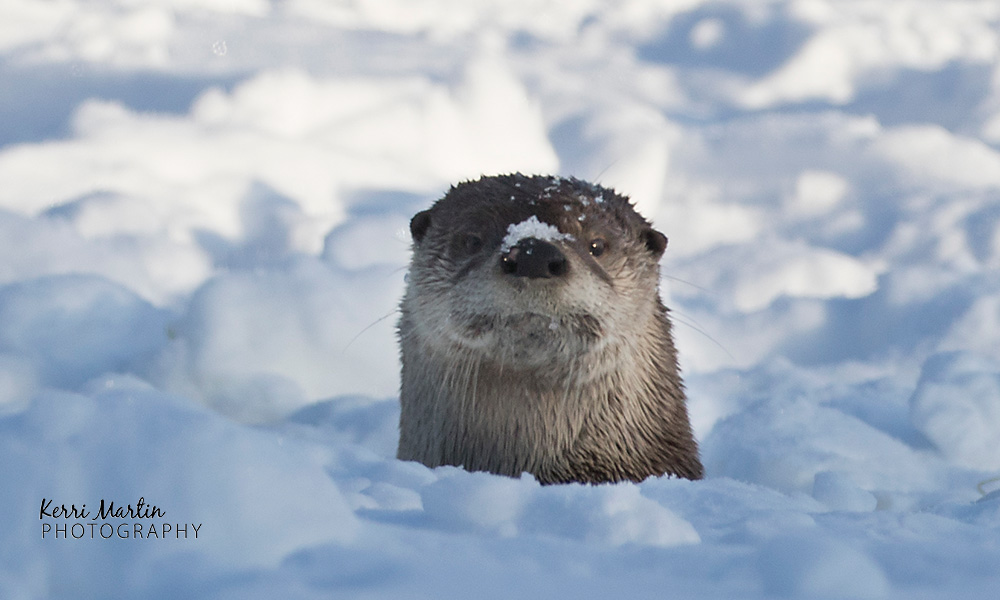 I captured my first-ever photograph of an otter!  Despite the turmoil she had caused the night before, I was so grateful she decided to briefly reveal herself. Jamie, however, was unable to get a photo. He was on the wrong side of the car.

We hoped she would come out again, feeling a bit more comfortable with our presence, so we waited – until Jamie came up with a brilliant plan.

Always the gentleman, that Jamie, but his intentions were honourable. Based on our game of cat and mouse the night before, the otter was bound to reappear after the car drove away.

A fantastic plan, I thought, but since I had already gotten a photo, I suggested Jamie be the one to be dumped in the snowbank and I be the one to drive away. He happily agreed.

According to Jamie, as soon as the sound of the car faded, the otter came out of the hole and slid around on the icy surface of the lake. Despite being camouflaged in a snowbank, the otter was aware of Jamie’s presence, but did not seem to be bothered. I guess a lone person was not as big of a threat as a large vehicle. Jamie had ample time to grab some photos. When I returned to pick him up, we reveled in pride for having finally out-smarted the otter.

It turns out, this was one of 10 otters we got to observe and photograph that day.

There was the family of four who floated by us on a river, thrusting their heads though the ice, releasing the most unusual squawking/chittering sound. 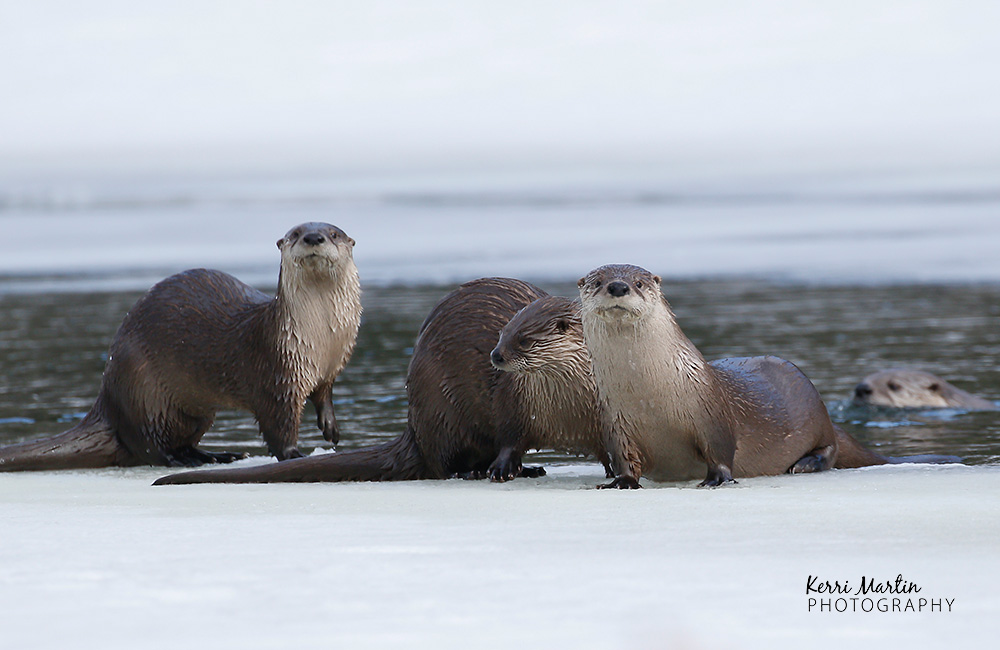 We also got a chance to watch a family of three cuddle, play and belly-slide across the surface of the snow… 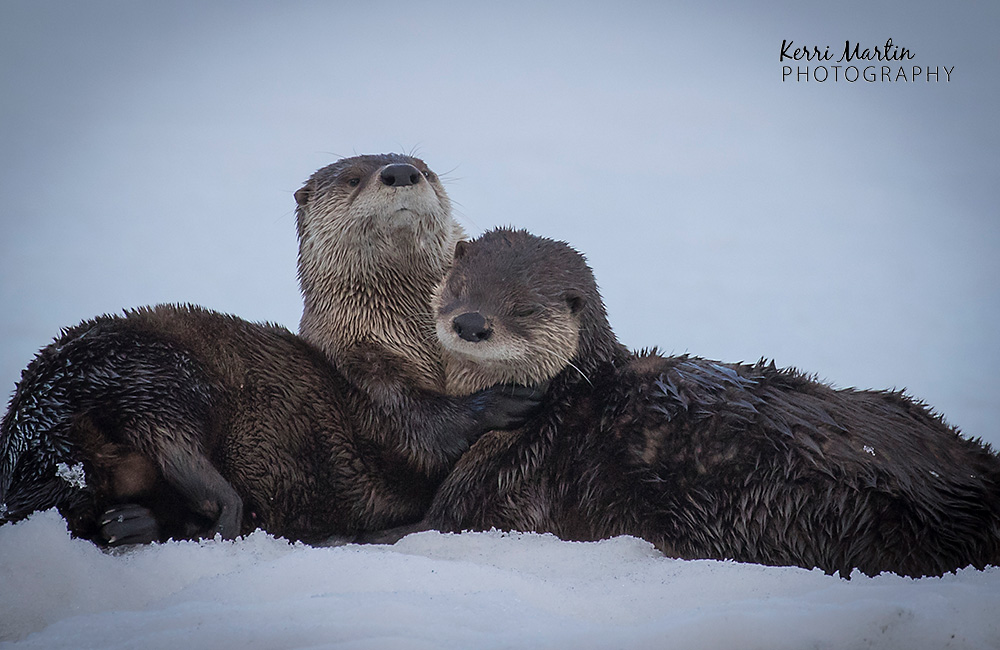 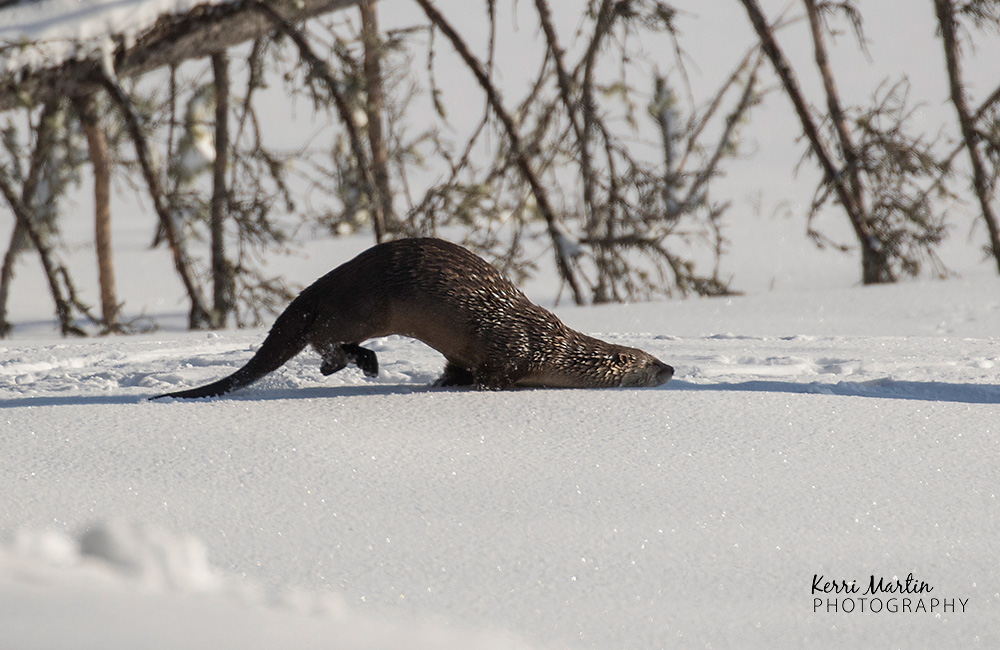 We needn’t have worried about out-smarting our first elusive otter, but we didn’t know that at the time.

River otters are among the most fascinating creatures I have ever photographed. They have the potential to be vicious when it comes to taking down prey – this is a trait all members of the weasel family possess. But their predatory instincts alone do not define them in my mind. They are intelligent, playful, family-orientated animals with the power to lure photographers to travel long distances and endure intense frustration. All completely worth it!

A special thanks to PA photographer Duane Larsen, who I connected with on Instagram, for helping direct us through the park. Please consider giving him a follow – he has some amazing photos!

And of course, check out my friend Jamie’s remarkable images as well.