November 2, 2019
The concept of ‘wolf energy’ has been ping-ponging around in my brain ever since I saw this beautiful wolf in BC in early June. 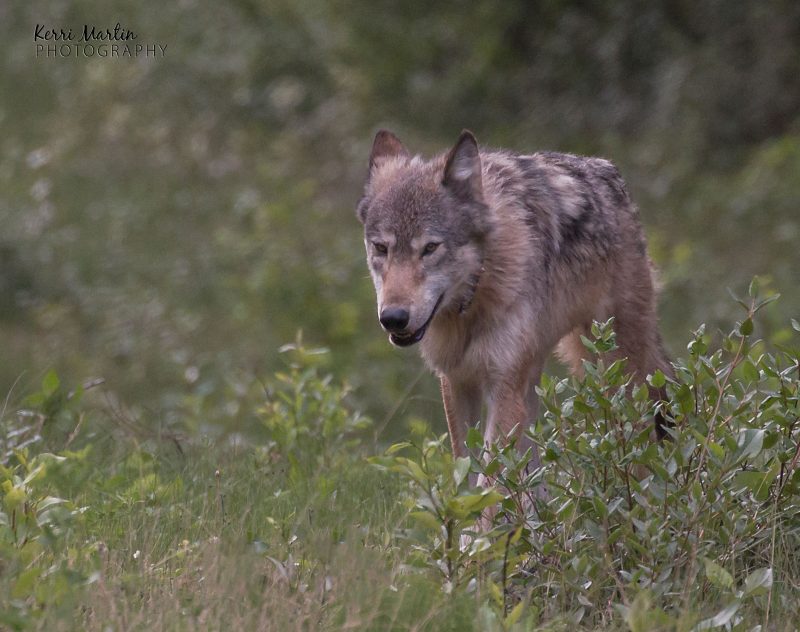 I made brief eye contact with him, and a powerful energy entered my being. I know that sounds kind of ‘out there’ – the energy was not good or bad, it simply was…

‘Wolf energy’ is the only way I can describe it.

For me, connecting with this new awareness of wolf energy has resulted in dramatically different emotional states.

Sometimes the energy inspires a shift of perspective, nudging me towards a balanced state of authentic acceptance. Other times, it intensifies my awareness of animal suffering, sending me into a downward spiral of sadness, frustration and helplessness. Today was one of those days…

I attended the Wilderness, Wildlife and Human Interactions: Elements of Ethical Co-Existence conference, hosted by the Cochrane Ecological Institute, and was grateful for the opportunity to see a presentation by Sadie Parr, Executive Director of Wolf Awareness.

With understanding and compassion, Sadie did an amazing job of highlighting some disturbing examples of government-sanctioned wildlife management policies, resulting in Alberta wolves being shot from helicopters, poisoned by strychnine and indiscriminately killed – all under the guise of wildlife conservation.

I did not realize it at the time, but this presentation evoked my inner wolf energy, leading to the above-mentioned downward spiral.

The state of our world right now is just so sad. Sometimes, I have to allow myself to go down that spiral and just sit there….

Wolves are so good at being wolves. As pack animals driven by a need to connect with other wolves, they crave companionship, family and community. Not only do they have the ability to build complex social structures within their own species, they gracefully adapt to all the garbage we humans constantly throw at them.

In Alberta, scapegoated as the primary cause for the decline of caribou, they have been sentenced to death without a trial, or even any evidence to suggest they are guilty of such an atrocity. (Note: Habitat loss = declining caribou populations. Please read more here) 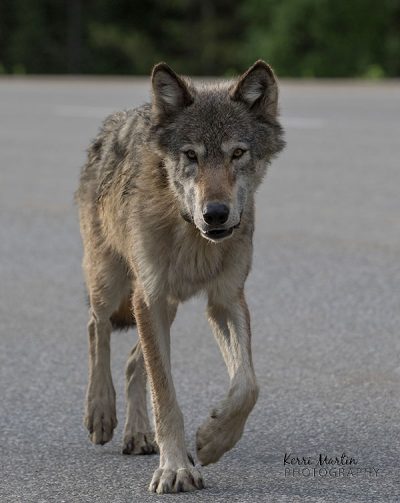 Being part of the species who has caused such intense suffering, this wolf, who I encountered on a busy highway in BC, had every reason to hate me.  As a human, I’m lucky he did not jump through the car window and attack.

But a wolf, of course, would never judge me, or assume I am ‘bad’ simply because of who I am naturally. Instead, he offered me the gift of his presence.

Wolves do not judge or assume – they are gentle, forgiving, understanding and remarkably adaptable. As with every other living being on this planet, wolves do not persecute humans for being humans.

Humans are the only species capable of doing such a ridiculous thing, of destroying millions of other species, and possibly our entire planet, in our selfish quest to make things better for us, and only us.

I realize I am being hard on humanity at the moment. I prefer to be in a place of appreciation for the ‘good’, rather than focusing on the ‘bad.’ I get it. Every thing is equal parts good and bad, yet really nothing at all, at least not until I decide to imprint it with my highly impressionable human perceptions.

However, I truly believe nurturing our inner wolf energy has the power to diminish our inclination to define everything according to our limited perspectives, to shift from judgement to acceptance. I believe this because I have experienced it.

While I am heavy-hearted at the moment, I am aware of the comforting gratitude I have for the gift animal energy of all forms, not just wolves.

To all the miraculous living beings who have shared their essence with me, including my fellow humans, THANK YOU!